An I Rocked Stocking

I'm in a stocking swap on the Circle Message board.  I've never participated in a swap like this before, but it was really fun to shop for someone else that enjoys the same things I do!  My person should have her package  by today, so I think it's o.k. to show what I did to the stocking.   I probably should have taken the picture empty, but it's got some stuff in it! 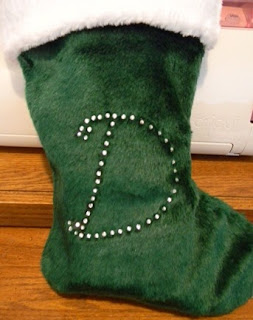 I just bought a plain stocking and decided to put her initial on it with my i Rock.  I looked up some fonts on the internet and free handed the design.   You need to put something firm in the stocking or it won't work.  I cut a piece of cardboard from a box and slid it in.  It did take a bit of time, but I think it turned out pretty good!  Now my daughter wants one :)  I might buy a small one so the letter won't have to be so big!!

Email ThisBlogThis!Share to TwitterShare to FacebookShare to Pinterest
Labels: I Rock