Today's theme is Spring and we were to use the colors yellow, blue and green.  And apparently, we were supposed to use a buttlerfly somewhere on our project too.  But, I was so focused on the colors, which I had trouble with, that I totally missed the butterfly!  I did try to find a ready made one to add last night, but I only found pink, since that's what I use a lot :)

Oh well, at least I got the colors right! 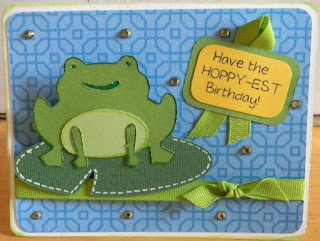 Here are the details:
Next time, I will pay more attention to the last line of the assignment :)  Make sure to go back to My Pink Stamper to see the entire Design Team's projects and to add your own too!

Have a fabulous day!

Email ThisBlogThis!Share to TwitterShare to FacebookShare to Pinterest
Labels: Buggy Punnies, Once Upon A Princess; From the Heart

Hello everyone!  Today, I am posting over on Robyn, My Pink Stamper's blog.  Very Exciting!!  I am so blessed to be on her design team and work with her and all the amazing ladies :)


I made some carrot boxes filled with mini jelly beans for today.  Here's a picture.  Make sure to leave a comment on Robyn's blog for your chance to win a Yummy-licious set of your own.  In fact, all the guest designers have a set to give away this week, so make sure you go back through all of them to leave a comment and see the amazing creations they posted! 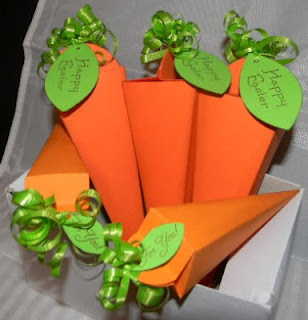 The boxes came from Teresa Collins Bunnies and Chicks Cricut Craftroom cartridge.  They were cut at 7 and 4 1/2 inches.  I like the smaller ones better!

Email ThisBlogThis!Share to TwitterShare to FacebookShare to Pinterest
Labels: Bunnies and Chicks, Yummylicious

You Make Me Hoppy!

Hi!  Here's the bunny card I made this weekend.  I was looking through My Pink Stamper stamps and just really wanted to use this punny saying :) 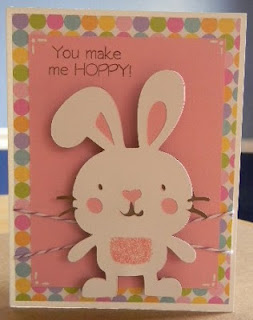 Here are the details:
Looking at the card today, I think I should have used a Cuttlebug folder on the pink background.  I'll just have to remember that for next time!

Have a great day!

Email ThisBlogThis!Share to TwitterShare to FacebookShare to Pinterest
Labels: Create A Critter, Even More Punnylicious

Hello everyone!  Just thought I would pop in real quick to let you know I will have projects up some time this week.  I had a really fun weekend with my Woodstock Swarm gals on Saturday and Sunday.  I really did not get as much done as I wanted and 3 of the projects are for assignments.


But I do have a cut little bunny card I hope to post tomorrow, I just didn't get a picture made when I got home last night.


Lots of fun things going on so stay tuned!!

Hello everyone!  I was going to show you a card today along with the winner, but I was just too tired to find all my information last night :)

So all I have today is the winner from the My Pink Stamper Pinkalicious Blog Hop Friday night.  And since I was too tired to post a project, I also did not get the the goodies together to show you.  So it is a complete surprise to the winner--LOL!  (It's pretty good--I promise!)  I will post the winnings this weekend, I hope.

Random.org picked #52  -- and then I had to count since the new Blogger made my comment numbering go away and I can't figure out how to get the numbers back!


Kristi Mar 10, 2012 07:10 AM
The flourish shamrocks are awesome. Love the way you lined them in glitter! So pretty!
Yay Kristi--you will get a fun surprise from me!! Please contact me with your mailing information and I will get your surprise out to you ASAP.  And since you left your email, I will also try to contact you today as well!

Thanks so much to everyone who visits and all the nice comments you all leave!  Have a fabulous day!!

Email ThisBlogThis!Share to TwitterShare to FacebookShare to Pinterest
Labels: Winner

Hello!  Today I thought I would show you the Make n Take we made at the Atlanta Circle Crop.  Well, we started it there, but we had tornado warnings and so we all left a bit earlier than expected.  I finally finished putting this together over the weekend.  I had all the pieces assembled, I just added stickles, heat set gems and then put it all together. 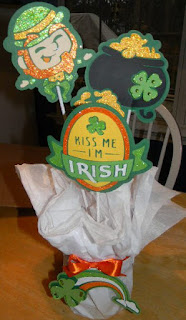 Shannon, from Provo Craft brought everything all cut out for us.  The cuts are from the Cricut Craftroom St. Patrick's Day cuts.  The sticks are in a salt container--such a great idea!

I figured I should finish it up since it's St. Patrick's Day on Saturday :)

See you tomorrow with the winner my giveaway from Friday!

Hello again!  Today I have another shape card that didn't make the cut for publication.  It's a fun watermelon shape. The color is not the best but I thought it was fun!

Here are the details:
I just cut 2 out and folded down the back again for the card base. The seeds is where the brown paper is but then I covered them in stickles.

I hope you have a great week!  Check back on Wednesday for the winner of my surprise goodies from Friday's post :)

Hi everyone!  I hope you are having a fabulous weekend :)  Don't forget you can still leave a comment on my last post to win some goodies (it's a surprise).   And be sure to participate in My Pink Stamper's challenge over on her blog.

Today I have a card I had made and submitted for publication.  It didn't get picked up so I thought I would finally post it here. It's a shaped card of flip flops.  I cut two out and then just folded down the corner of the back one and glued it together. 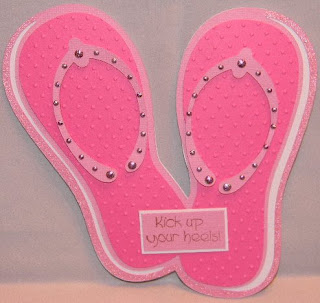 Here are the details:
This was really my favorite out of the ones I have submitted but oh well!  Have a great day!!

Hello everyone!  I am so glad it's Friday and doubly glad since it's a My Pink Stamper Pinkalicious Blog Hop night :)  If you have just come from the fabulous June at Simply Elegant Paper Crafts ,you are on the right track.  If not, be sure to start at Robyn, My Pink Stamper.  Plus, she has a live UStream going on 9pm EST/8pm CST.


Today's challenge is to make something for St. Patrick's Day.  I decided just to go with a card this time around. 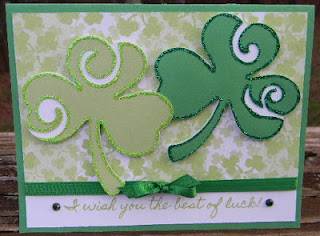 Here are the details:
I just love the More Fabulous Phrases set that is one of Robyn's newest sets!  This card would be great for a good luck card for a friend too :)  Oh and I got that fabulous paper from my friend Angie at our Circle Crop last weekend--she was so sweet to share with me!

Your next stop on the hop is the always awesome Edna at Create With Expression.  Then be sure to go back to My Pink Stamper to link up your own project that you made for this challenge.

I do have a small giveaway for you today.  Leave one comment and a way for me to get in touch with you and you have a chance to win a surprise!  I have a few DCWV mat stacks, some ribbon and a My Pink Stamper set too. I will draw a winner on Wednesday, so check back then and you can see the winner and what she won :)

Here is the lineup in case you get lost along the way:

Email ThisBlogThis!Share to TwitterShare to FacebookShare to Pinterest
Labels: Celebrate with a Flourish, More Fabulous Phrases

Hello!  Just a quick post to show you my calling card from the Circle crop I went to over the weekend.  A calling card is 3x3 inches you trade with everyone attending.  You put your name and whatever information you want to share on the back.


The theme for the weekend was St. Patrick's Day and most everyone made their cards to fit the theme.  I did not :)  I wanted it to be more about me than the theme so I made mine pink, of course! 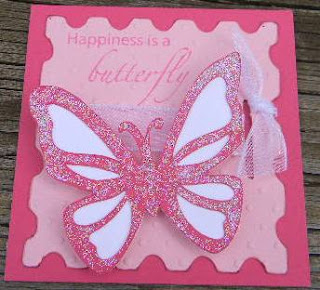 I used Art Philosophy for the base cut and used the Swiss Dot Cuttlebug on it.  The butterfly is from Paper Trimmings and cut at 2 1/2 inches.  I stickled it, of course!  And the sentiment is from My Pink Stamper Buggy Punnies.  Finished it off with ribbon and pop dots for the butterfly.


Have a great week everyone!!  Don't forget that this Friday is a My Pink Stamper Pinkalicious Blog Hop :)


It's been a while since I posted--just normal, but crazy days at my house!  I went to a Circle Crop this weekend and did make a few things.  I haven't had a lot of mojo and yesterday was no exception.

But, I did break out my new Tags, Bags, Boxes and More 2 cartridge to play with.  I learned a few things that I thought I would share with you all here. 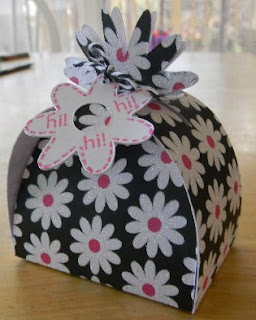 I first tried cutting out one of the take out boxes on some pretty green patterned paper.  Well, there were no score lines!  Then I looked at the booklet a little closer and saw that you need to hit the shift function to get the score lines.  So I tried it again on the same paper, but couldn't see the lines to fold and they were not deep enough just to fold either--a bit frustrating!  Someone mentioned that others had this problem of not seeing the lines and to try putting the paper pattern side down.  So I tried that, but with different paper and a box with only 4 score lines.  But my paper was glittery and not sticking so I had to tape it to the mat.

Here are the steps I used:
I used my Gypsy to do all of this.  So when it was done scoring (I actually scored 2 times to be sure), I just hit return to design instead of unload.  Then I took off the scoring marks, added the box cut (to the same spot) and then hit the cut button.  It moved my blade to the spot it started cutting.

Some of the boxes require multiple cuts/scores and you need to glue them together to assemble the box.  but I wanted to try something easy first!

Shannon from Provo Craft was there on Saturday and heard me talking about not seeing the score marks on the pattern paper. She asked if she could take that sheet back with her to show them at Provo Craft.  So, hopefully this might be a fix they could make since I am sure I am not the only one who would love to make boxes with pretty, sturdy paper!

It's a fun cartridge and I will try again!!